Dining like a local in New Orleans: Check your sneakers at the door | Travel 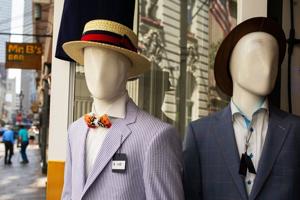 Alan Behr, Tribune News Service
It was not until I arrived at Cafe Du Monde that I realized you now have to stand in line to get your beignets and coffee with chicory. The beignet — a puffy, fried doughnut swimming in powdered sugar — has been a New Orleans tradition since the city was French. Cutting Colombian coffee with chicory (a locally available plant) has been a New Orleans practice since the Union blockade during the Civil War made it a necessity.Another tradition is table service. Although confectioner’s sugar still flew around the open-air seating area like hundred-euro notes in the back room at the Casino de Monte-Carlo, for the first time, I had to carry my coffee and beignets to the table myself. New Orleans dining is as much about hospitality as food and drink, and here was a city culinary landmark behaving like a McDonald’s with a great pastry chef.I was in town for my high school reunion, and as I swatted sugar off my pants, I considered how the old town is now kind of as it was and kind of not. My family’s stone modernist house, across from Lake Ponchartrain, had been torn down by a football player who had bought it; an imperious mansion in miniature now stood in its place.

John F. Kennedy Senior High, a short walk down Bayou St. John and the school whose class of long ago was now to have its reunion, is also gone, having been flooded during Hurricane Katrina (2005).Krauss, the department store my extended family had owned and operated on the main thoroughfare (Canal Street), had closed in 1997 — my history and memories devolving into 350,000 square feet of condominiums.The city itself is now largely given over to tourism. If you can mark the moment when New Orleans, which had tried keeping its best qualities secret, begrudgingly accepted that it would become a tourist city, it would be 1972. I was in my final year at JFK High, and Marriott opened the city’s first big chain hotel. The hometown indignation that ensued was of a kind that would be seen where I live now (New York City) if some international corporation were foolish enough to buy itself naming rights to Yankee Stadium.But destiny called, and it soon arrived in sneakers and shorts. Tourists came looking for wild nights on Bourbon Street in bars grown increasingly roaring with music known to them but far removed from the Dixieland jazz and blues of local invention. It had to happen. Even before Katrina flooded away so much residential and commercial life, New Orleans had become the American Venice: a city of mystery and charm no longer critical to the flow of the commerce it had once commanded. What had been the tallest and most important office tower when I was growing up, the World Trade Center, had closed in 2011. It awakened from its slumber 10 years later as the Four Seasons Hotel.You know a new hotel has already found its way in when locals feel free to marry there. An outdoor wedding was in progress below my finely appointed room as I left to meet with longtime friends at the gourmet restaurant Chemin a la Mer. The meal, which started with oysters Rockefeller (made with spinach) and moved to a twin duck entree of pan-seared breast and confit of leg that was, in this expatriate’s view, fully New Orleans certified.It was time to revisit some of the traditional restaurants of my youth.Two important notes: In New Orleans, tourists book the restaurants; locals instead book the waiters who work there. Tourists may indeed show up in those shorts and sneakers, but locals still dress for the occasion.

On Friday afternoons, Galatoire’s had long been the place for the business elite to hold power lunches. As you walk in, you pass two Seventh Avenue racks of dark men’s sport jackets — a reminder that, come dinnertime, if you show up without one, you will get no farther until a loaner is on your back.My waiter from years past had moved on, but my small party from the reunion would be served by a veteran named Charlie. In the main dining room, three large tables were filled with different groups of women having a grand time. It was so loud, I could barely hear Charlie announce the menu in true New Orleans style: “We have a pork chop, a veal chop and a couple of chicken dishes I can’t remember, but I’ll get a menu.” When clearing, Charlie asked me, as naturally as if inquiring about dessert, to pass along another diner’s plate. I did have one of those unheralded chicken dishes — the chicken Clemenceau (roasted, with Brabant potatoes). It all felt just like home.Another long, if personal, tradition is that Antoine’s (founded in 1840) will botch something when I show up. This time, even though I had booked a specific waiter for a named semiprivate room, when I arrived with my party, we were told the man and the space had been given over to an event that showed no outward trace of happening. A New Yorker might have opined graphically about the switch, but this was New Orleans — you just let it go.We were placed instead in the agreeable and quiet annex. Chad, our waiter, could not have been more gracious. He pointed out that the restaurant had invented oysters Rockefeller — but emphatically does not use spinach in the recipe. My chicken Rochambeau (herb-roasted breast) was comfort-food grade, but the baked Alaska remained a showstopper.When I was young, those New Orleanians who could wake early enough on weekends for brunch might head either to Brennan’s, in the French Quarter, or Commander’s Palace, a streetcar ride away in the leafy Garden District. Both were, and after some turns of history have again become, twin egg-dish palaces run by members of the Brennan family. As is often said at reunions, it seems like yesterday that I walked into the courtyard at Brennan’s and was greeted with a respectful nod from Elle Brennan (the since-departed grand doyenne of New Orleans dining) from an armchair set up in the courtyard like the throne of the culinary queen that she was in all but name.

How did such an important force of epicurean nature spot me as a New Orleanian from 10 yards off? In New Orleans, a city that smiles at tourists even as it hoards and guards from them what is authentically local, people just kind of know. That was likely why, on my last visit to Commander’s Palace, despite arriving without a reservation when, by all appearances, the restaurant had been booked solid, I was welcomed in with, “Sure we have a table for you.” When I had taken care to book ahead this time, the reservationist had cautiously raised the dress code, only to chuckle in relief when I told her of my connection to the city and that, of course, I would be properly attired.A jazz brunch was in progress when I met my friends there, the musicians soon encouraging all diners in the crowded main room to form a second line. Pronounced as one word, a second line is a purposely chaotic, parading street dance open to participation by anyone it chances by. Ours wound, handkerchiefs waving, among the tables as a second line must: behind a leader piston pumping a colorful umbrella skyward.At Brennan’s the next day, brunch ended with the restaurant’s signature bananas Foster. Your waiter makes it tableside by igniting a Molotov cocktail of rum and banana liqueur in a saucepan, somehow to wean an ice-cream dessert from a conflagration.At the high school reunion, we all reminisced about old times and about those who are no longer with us. Each reflected silently on how old the others had gotten — and then we gave up on all that and formed a second line.I returned to the Four Seasons with a personal souvenir given by an old friend: a large Krauss shopping bag. As I came back to the hotel, Dwight, a kindly doorman, called after me to have a look, not believing his eyes. “I have chills,” he said, recalling the days he and his family would visit the store, holding his hand to knee height in approximation of his younger self. “Any true New Orleanian will remember Krauss.” That was a special moment for me of both memory and loss.My final meal was at Saba, a casual Middle Eastern place on the once-rundown and now trendy Magazine Street. Tinkering with the recipes of other places also being a New Orleans trait, my matzo ball soup forsook chicken for duck with sweet potatoes and herbs.In the old days, after a proper New Orleans weekend, the best we could do was sleep it off. My concession to contemporary life, just before checking out of the Four Seasons, was to show up at the Spa for a treatment billed as the Southern Gentleman. As given by Marion, it involved an all-over massage. This being New Orleans, the drink she served from a tray right after was not mineral water or herbal tea. It was a well-made Big Easy concoction known as a Sazerac, which typically involves mixing rye whiskey with Peychaud’s bitters and anise liqueur. Just drop in a sugar cube and serve in liberal quantities. For whatever pains of a gentleman the massage had not relieved, Sazerac had arrived to finish the job, New Orleans style.Dining in New OrleansAntoine’s (French Quarter): www.antoines.com.Brennan’s (French Quarter): www.brennansneworleans.com.Chemin a la Mer at the Four Seasons Hotel (Riverfront): www.fourseasons.com/neworleans/dining/restaurants/cheminalamer.Commander’s Palace (Garden District): www.commanderspalace.com.Galatoire’s (French Quarter): www.galatoires.com.Saba (Magazine Street): www.eatwithsaba.com.Tip: Dress as if to dine with Grandma at the Club.

The best urban landscape photos from our Destinations Photo Contest

This gorgeous street corner is in the Dutch Caribbean. (photo: Connie Clay)

I want to be serenaded! (photo: Lisa Kepner)

Where dreams are made of. (photo: Amanda Payne)

I took this picture of the Disney Concert Hall in Los Angeles in February, 2016, after I returned from a Mexican Riveria cruise. (photo: Richard Thies)

From our table in Boston (photo: Hank Ward)

The comeback kid. An older city that never gets old. A typical Sunday night on Bourbon street. (photo: Tonya Tripi)

London Bridge and The Shard

London Bridge and The Shard from the river Thames at night. (photo:Damon Lewis)

How simply life was days before the pandemic. February 2020 (photo: Julie Hoffman)