In a travel climate of changes, a ‘Plan B’ flight could save your trip | Travel 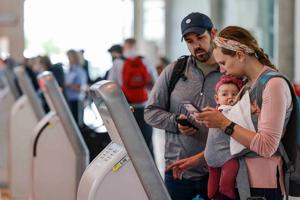 George Hobica, Tribune News Service
We’re ready to fly again, but are the airlines ready to fly us?Staffing problems — a shortage of pilots, flight attendants, even baggage handlers — and unusual weather patterns have led not just to everyday cancellations, but to flights being scrapped from schedules entirely, sometimes at the last minute but often days or weeks before departure. That 9 a.m. nonstop you bought in March for a trip in May? It’s now on connecting flights with a three-hour layover. Or it now leaves at noon, which means you’ll miss the cruise or the wedding or the funeral or your kid’s starring role in the school play.Far-in-advance airline schedule changes like these are nothing new, but they seem to be happening more often now thanks to the lingering effects of the pandemic.First, check to see if your original flight has really changed at all. That’s what I advised Lew Davis, a high school teacher living in New York, when his morning nonstop to Denver, bought in August for a trip over Christmas week, was changed to an afternoon connecting flight. His original fare was an unbelievable $128 round trip, and Delta still offered his original nonstop flight, but now at $700. I told him to call the airline and protest. And call again, and again if necessary. The airline eventually relented and restored his original itinerary.

Children left alone for hours with dead mother after she overdosed in St. Charles

Airlines state in their contracts of carriage, which you can read online, that they are obligated to fly you between only the cities listed on your ticket. Schedules are not guaranteed, nor are specific routings or seat assignments.In most cases, your only recourse if you’re unhappy with a schedule change is to request a full refund. But that won’t get you to the cruise or class reunion on time, and it may leave you needing to buy a last-minute fare at a much higher price on another airline, assuming one is available.In most cases, a change of a few hours won’t cause havoc with your travel plans, but sometimes it can make the whole trip pointless. If you absolutely, positively need to get there on time, you might consider buying a “Plan B” flight on another airline. So if your 3 p.m. nonstop from Chicago to Miami on American is now a 6 p.m. connecting flight, request a refund and hop on your 2 p.m. backup flight on United.Now that there are no change fees on airline tickets (you either get a flight credit or a full refund depending on the fare class), it’s a doable option for those times when missing an important occasion or a cruise departure would be unthinkable. Just be sure to cancel Plan B before takeoff if your original plans go as scheduled or there’ll be no credit or refund.

Did you know TSA prohibits these innocent items from being in your carry-on bag?

Much to the dismay of British travelers, English Christmas crackers are prohibited by the TSA.The small, popular party favor is used to celebrate Christmas and other special occasions. When popped, it creates a “bang” sound with the help of a minuscule amount of gunpowder stored inside.

According to the U.S. Transportation Administration, ink and toner cartridges that are more than 16-ounces in weight pose a risk to air travel security and are banned from both carry-on and checked baggage.

Sports equipment like baseball bats, hockey sticks and golf clubs can be used as bludgeons and are prohibited in the cabin of airplanes. If you wish to travel with these items, they must be stored and transported in checked baggage.

As long as they aren’t labeled “hazardous material,” aerosol insecticides can be transported in checked baggage. However, you could have your can of bug spray swiftly confiscated if you try to bring it through TSA.

The highly entertaining (and rather annoying) childhood toys known as Bang Snaps, Bang Pops, or TNT Pop-Its are strictly prohibited in both checked and carry-on baggage. This is most likely due to the small amounts of explosive silver fulminate stored inside of each tiny pouch of fun.

Although it’s highly unlikely you would ever be traveling with a can of Pam, you should know that it is considered a restricted item according to TSA’s standards. Cooking spray cannot be transported by air travel in checked or carry-on baggage.

If you’re traveling to or from a certain fairytale-themed amusement park, be sure to explain to your young prince and princess that their foam swords must travel separately in a checked bag.

One way TSA could ruin your holiday mood is by unwrapping a gift you spent time packaging. Unless you want your gifts to be unwrapped and reconstructed with TSA tape, you may want to wait until arriving at your final destination before wrapping presents.

According to the U.S. Department of Transportation and the Federal Aviation Administration, all Samsung Galaxy Note 7 smartphone devices are banned from air travel in the United States.The ban was initiated in 2016 after a series of recalls on the device were ordered due to its tendency to spontaneously combust.“Device owners have experienced documented incidents of dangerous evolution of heat with both recalled and replacement Samsung Galaxy Note7 devices,” the Department of Transportation said in a statement. “Anyone violating the ban may be subject to criminal prosecution in addition to fines.”