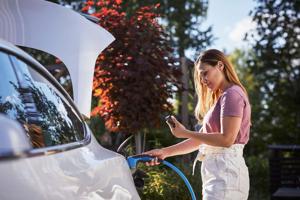 Sally French
Soaring gas prices have made road trips more expensive, while also contributing to increasing costs for airfares. And while you’ll likely not fly in an electric plane anytime soon, this might be the year of the electric car road trip.Even if you don’t own an electric car yourself, it’s fairly easy to rent one. And given high gas prices — averaging $4.95 per gallon nationwide and a mind-boggling $6.37 in California, according to AAA data from June — electric cars might be among the cheaper ways to travel.Here’s what you need to know if you’re considering an EV car rental.Look to major rental car companies

Many major rental car companies, including Hertz and Enterprise, offer electric vehicles, at least at some locations. The Enterprise website makes it especially easy to find an electric vehicle with its filter tool, allowing you to narrow results to hybrid and electric cars only.During the first weekend of June, you could rent a Nissan Leaf for $210 per day from the San Francisco International Airport Enterprise, or a Tesla Model S for $275. Meanwhile, a Toyota Corolla went for $200 from the same location.It doesn’t take a lot of driving to justify the $10 price increase in the Leaf versus the Corolla in terms of gas savings. And considering gas prices are averaging about $6.52 per gallon in San Francisco, according to AAA, the cost to refill the Corolla’s roughly 13-gallon gas tank would be about $85, making the pricier Tesla Model S seem like a deal if you’re driving a lot.Know that electric vehicle fleets are growingYou might not be able to find electric vehicle availability this summer, especially if you’re traveling in a less-populated area. Rental cars, in general, can be tough to find, and limited availability makes finding electric vehicles even tougher. But don’t give up on the idea of an electric vehicle road trip, as you‘ll likely find more availability soon as rental car companies expand their fleets.In November 2021, Hertz added Tesla Model 3s to most of its locations in major U.S. cities, plus some in Europe. The company also ordered 100,000 Teslas that it expects to join its fleet by the end of 2022, which it claims would make it the largest EV rental fleet in North America.And this spring, Hertz announced a partnership with Swedish electric car maker Polestar, in which it promised to purchase up to 65,000 Polestar vehicles over the next five years. Polestar electric vehicles are set to arrive in North American Hertz rental locations by the end of this year.Look to nontraditional rental car companiesMajor rental car companies aren’t the only place to rent an electric vehicle. They also frequently appear through rental car alternatives like Turo and Getaround.Most of these alternatives are peer-to-peer sites that operate similarly to Airbnb, where you book cars from the car’s owner, who is likely just a regular person making some side income while their car isn’t in use.During July Fourth weekend, renting a car in Honolulu puts you face to face with gas prices around $5.55 per gallon. But head to Turo, and you’ll find dozens of Tesla models available, and even a couple of other EV options, like a Nissan Leaf and a Polestar. Prices are set by the owner, and most Tesla Model 3s go for just over $100 per day.Not only are cars rented through these car rental alternatives often cheaper than had you rented from a conventional company, but they might be your only option given how the major car companies are still replenishing their fleets.I rented an electric car. Now what?Driving an electric car means no more gas station stops, but it adds on stops to charge it.Ideally, you’ll want to charge your EV at the same place you’re spending the night. Many hotel and vacation rental companies have made it easier with filters of their own to browse accommodations that offer electric vehicle charging. It’s also increasingly common to find hotels promoting electric vehicle charging as a guest benefit — often at no cost.Some vehicle manufacturers, such as Hyundai, Nissan and Tesla, also provide complimentary public charging, according to the nonprofit Center for Sustainable Energy.If you can’t find a free charger, factor the cost to charge your electric vehicle into your overall vacation budget. The Center for Sustainable Energy analyzed the cost to charge from EVgo, which has more than 850 charging stations nationwide, and found that charging a 40-kWh battery with a 150-mile range would cost between about 8 and 9 cents per mile.To put that into context, driving a 2018 Toyota Camry the roughly 600 miles round-trip between Los Angeles and Yosemite National Park would cost about $95 in gas, according to AAA estimates. In contrast, the cost to charge an EV would be about half that.If you frequently rent electric vehicles, consider charging those expenses to a credit card with electric vehicle rewards.Also account for the time needed to charge your electric car. Depending on the voltage of the outlet or charge, it can take anywhere from about 15 minutes to several hours. Do your research ahead of time so you don’t find yourself sitting in a random city for hours as you charge your car on your way to your destination.The bottom lineWith gas prices high, renting an electric car can make financial sense. Even if an electric vehicle seems like it’s a car fit for someone in a tax bracket higher than your own, that might not be the case when renting a car this summer. The sticker price of the rental might be higher, but don’t overlook the fact that increasing gas prices might cause the total price to be even more.The article Want a Gas-Free Road Trip? Consider Renting an EV originally appeared on NerdWallet.