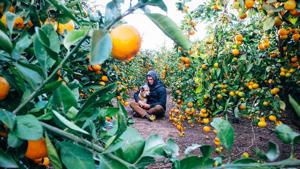 Tom Turcich, from New Jersey, and his dog Savannah spent seven years walking around the world together.

Very few people attempt to walk around the entire world, and even fewer actually manage to complete the journey.On May 21, 2022 Tom Turcich, from New Jersey, became the 10th person on record to achieve this remarkable feat, while his four-legged companion Savannah was the first dog to do so.The pair were greeted with a huge homecoming celebration attended by many of Turcich’s friends and family, along with well wishers.Editor’s note: Monthly Ticket is a CNN Travel series that spotlights some of the most fascinating topics in the travel world. In July, we’re hitting the trails to explore the world’s greatest hikes.The triumphant moment brought about the end of a seven-year, 48,000-kilometer (29,826-mile) journey that he’d spent even longer working toward.

“It was very surreal,” Turcich tells CNN Travel from his parent’s home in Haddon Township. “I had imagined what the ending would be like for a long time. And when it happened, there were people lining the streets and walking with me.”The primary emotion was just relief. This had dominated my life for 15 years, and to finally be able to kind of put it behind me was amazing.”Inspirational walkThe inspiration for the trip stemmed from a sad loss in 2006, when his long-time friend Ann Marie died in a jet ski accident at the age of 17.”It [her death] was very formative for me,” he explains. “She was a much better person than me. And it sunk in that I was going to die [one day] and it could happen at any moment. And I started re-evaluating everything.”Turcich, who has been compared to Forrest Gump, the character Tom Hanks played in the 1994 movie, decided he needed travel and adventure in his life and began looking into all the different ways he couldAfter reading about Steven Newman, listed by Guinness World Records as the first person to walk around the world, and walking adventurer Karl Bushby, who has been circumnavigating the globe on foot since 1998, Turcich became set on taking on this challenge himself.”It [walking] seemed like the best way to understand the world and be forced into new places,” he says. “I didn’t just want to go to Paris and Machu Picchu, I really wanted to understand the world and see how people were living day to day.”

The pair in an orange field in Valencia, Spain back in 2018.

Once he’d committed to the task, Turcich started planning out the route, while also trying to raise funding for his travels.He managed to save enough to last him around two years on the road by working during the summer while he was at college, and moving back in with his parents after he graduated.However, shortly before he was due to leave, the owner of a local company, Philadelphia Sign, found out about his plans and decided to sponsor his trip.”He [the businessman] happened to know Ann Marie and her family,” he says. “And he just wanted to support me however he could.”Almost nine years after he first came up with the idea, Turcich took the first step of his walk around the world.He set off on April 2, 2015, just before his 26th birthday, pushing a baby stroller containing hiking gear, a sleeping bag, a laptop, a DSLR camera and a plastic crate, which he used to store his food.Turcich says he devised his route with two major factors in mind — he wanted to “hit every continent and travel with as little bureaucratic trouble” as possible.”I thought it would be about five and a half years,” he says. “And that proved pretty accurate for the actual walking.”Loyal companionThe entire journey ended up taking seven years, mainly due to two significant delays. The first occurred when Turcich fell ill with a bacterial infection, which took him several months to recover from, and the second was due to the Covid-19 pandemic.He inevitably experienced various highs and lows along the way, including being invited to local weddings in both Turkey (or Türkiye) and Uzbekistan and being held at knife point while in Panama.Before he began the walk, Turcich had done very little traveling other than visiting England, Ireland and Wales during a high school exchange trip, and he’d also holidayed in Canada and the Dominican Republic.He also wasn’t hugely experienced in hiking, although he’d previously completed a 10-day hike with a friend, as well as a few weekend hikes.The first stage of the trip saw him walk from New Jersey to Panama. Around four months in, Turcich acquired his walking companion, puppy Savannah, from an animal shelter in Austin, Texas.While he initially had no intention of getting a dog, Turcich struggled to relax, particularly while bedding down at campsites, and would constantly wake up during the night convinced he could “hear something coming.”

Tom Turcich took countless images, including this photograph of Cappadocia, Turkey, to document his journey.

Dog breeds with the most timeless popularity

Dog breeds that are consistently popularity

Which do you like better, cats or dogs? If you chose dogs, you’re in the majority: 74% of adults said they like dogs a lot, while only 41% of adults said the same about cats, according to a poll conducted by the Associated Press. That’s not to suggest dogs are inherently better than their feline friends. Evolutionarily speaking, cats have actually been more successful, with superior hunting skills enabling survival even when food is scarce. On the other hand, science suggests dogs are smarter than cats because their cerebral cortexes contain twice as many neurons.There may never be a clear answer, but for the majority who prefer man’s best friend, Stacker has compiled a list of the top 35 dog breeds with the most timeless popularity. Using data from the American Kennel Club, we averaged each breed’s level of popularity in 1940 with its popularity in 2021. This analysis excluded any new breed introduced since 1940 and is based on data released on March 15, 2022, the most recent data available. Any ties were decided by the breed that ranked highest in 2021.Click through to find out if your favorite dog was just as beloved 80 years ago.You may also like: Things to consider when adopting a pet

– Average rank: 44.5- 1940 rank: 44- 2021 rank: 45Newfoundlands are known for their large size, which is enhanced by their heavy double-coat. They are also characterized by their sweet and gentle personality. While they may seem like the perfect pet, one of the Newfoundlands’ less desirable traits is their tendency to drool.

– Average rank: 44.5- 1940 rank: 43- 2021 rank: 46Called Westie for short, the West Highland White Terrier descends from a group of terriers bred to seek out vermin. As a result, they may share ancestors with cairn terriers and Scottish terriers. Though they look like soft stuffed animals, their outer coat is actually wiry and coarse.

– Average rank: 43- 1940 rank: 67- 2021 rank: 19As their name hints, Siberian Huskies originated from Siberia. They were bred to have serious endurance and a thick coat to withstand severe winters. These wolf-like dogs have won the hearts of many pet owners with their high energy and extra friendly personality.

– Average rank: 42.5- 1940 rank: 14- 2021 rank: 71Characterized by their silky chestnut coats, Irish setters were originally bred to hunt birds. Although they love humans, their hunting instincts can make them a threat to smaller animals. They are active and energetic, so potential owners should be prepared to take them on lots of long walks or runs.

– Average rank: 41- 1940 rank: 34- 2021 rank: 48The Chesapeake Bay Retriever gets its name from the shallow estuary that’s surrounded by Maryland, Delaware, and Virginia. In the 19th century, Chessies were used to hunt ducks in the Bay since their coat helps them repel water and stay warm.

– Average rank: 31- 1940 rank: 4- 2021 rank: 58This breed was developed in the Scottish Highlands and brought to the U.S. in 1883. Former President Franklin D. Roosevelt owned a Scottish terrier named Fala. She was said to have received her own fan mail, and now has her own statue next to Roosevelt’s memorial in Washington D.C.

– Average rank: 30.5- 1940 rank: 33- 2021 rank: 28Also known as Shelties, Shetland sheepdogs were bred in the United Kingdom as herding dogs. These long-coated pups look similar to their collie relatives but are much smaller, weighing only about 20 pounds.

– Average rank: 29.5- 1940 rank: 22- 2021 rank: 37One of the smallest dog breeds, Chihuahuas typically weigh no more than 6 pounds. This breed has earned itself a lot of screen time, with roles in “Legally Blonde,” “Meet the Fockers,” “Beverly Hills Chihuahua,” and as Taco Bell’s former mascot, Gidget.

– Average rank: 18- 1940 rank: 12- 2021 rank: 24This breed combines a tiny figure with a big personality. Although they weigh no more than 7 pounds, Pomeranians can be possessive and behave aggressively toward those who threaten their space. As a result, they may not be ideal for families with young children.

– Average rank: 15- 1940 rank: 29- 2021 rank: 1Despite their name, Labrador retrievers developed in Newfoundland, Canada, as opposed to Labrador, Canada. With coats generally in either yellow, chocolate, or black, Labs are an active breed that loves people and other animals.

– Average rank: 13- 1940 rank: 3- 2021 rank: 23Even though terrier is in their name, Boston terriers are part of the nonsporting group. The other half of their name makes more sense: They were developed in Boston and became the official state dog of Massachusetts in 1979.