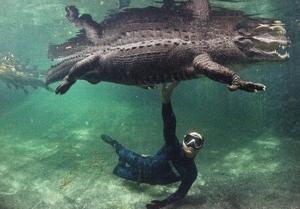 Madeleine Marr, Miami Herald
MIAMI — Want to feel like a bona fide Floridian?Go swimming with an alligator.Yes, this is an actual thing.Don’t worry. It’s totally, um, safe. A professional runs the show. That would be Chris Gillette, who is best known as one of the stars of Animal Planet’s “Gator Boys.”The Palm Bay native is a wildlife biologist with cred: He earned a bachelor of science in Environmental Studies with a certificate in Biodiversity Conservation and Management at Florida International University.More importantly, Gillette is also a professional wrangler for the state of Florida and has been training alligators for years. The animals at the refuge are all nuisance gators, that ended up in places they didn’t belong like backyards, near residential neighborhoods and schools.

Gillette runs tours Fridays and Saturdays at Everglades Outpost Wildlife Rescue in Homestead, right up the road from famed fruit and smoothie stand Robert is Here. The park also houses other rescues such as tigers, panthers, lemurs and monkeys.The 34-year-old YouTube personality is right there in the gator pit, a 30,000-gallon man-made freshwater pond, if anything goes wrong. Nothing ever has in his five or so years running these tours, he promises.The gator with you on the tour is called Casper, named that because he’s “friendly,” like the famed cartoon ghost. What separates you from the roughly 10-foot-long, 250-pound apex predator is a net barrier. And of course, Gillette, who is 6-foot-5 and about the same weight as the big guy.“This is a special situation,” Gillette says of the tours. “This alligator is trained. I’ve worked with him many, many years. He knows his name and comes when he’s called. He understands and knows what he’s supposed to do. Today, he has a job. He knows to do his job. You try this in the wild, it’s not going to go well for you.”Correct. So don’t get any ideas. We’re talking to you, fans of the “Jackass” franchise.“Safety first!!” stresses the outpost’s website, where you sign up for the half-hour, $250 experience. Gillette also sternly lays out the rules in a tutorial-meets-briefing beforehand.Look, but don’t touch is the No. 1 rule.

Andrew Ferguson, 21, from Arizona, sits behind a net to watch Casper the alligator swim during an Underwater Gator Tour at the Everglades Outpost.

“This is not a gator wrestling class. You will be able to be very close to the animal and observe and record its behavior, you can have photos of you near the gator, we just can’t allow guests to touch the animal for safety and legal reasons,” the website warns.Only one person at a time can dip into the 77-degree pool. A wet suit is not required but if you get chilly (the area is shady), it’s recommended you bring your own. If you don’t have a mask, snorkel and weight belt, it will be supplied.Guests behind the net observe Casper as he paddles by doing his thing, mostly checking you out with his big, black eyes and nibbling on small meat snacks doled out for good behavior. Another, smaller female named Little Foot may enter the pool party, depending on her mood.“You see them under water and the way they move and glide so effortlessly,” says Gillette. “It’s really beautiful, and it gives people a really unique perspective.”Warning for the skittish: Though “amazingly gentle,” Casper will often approach the net to investigate. The sight of such large teeth, armor-like skin and massive jaws may alarm some, even those who are watching from the viewing perch above.Andrew Ferguson, a recent participant, was still trembling five minutes after leaving the hair-raising encounter.“I’ve never been that close to a predator before — and to really feel it — if you know what I mean. It’s different,” said the 21-year-old, adding he didn’t mind the intense adrenaline rush. “Definitely cool.”Ferguson’s pal, Connor Blue, from Salt Lake City, emerged from the habitat totally exhilarated and humbled. He also added that he felt very safe.“You’re with a very good expert who never had any problems,” the 22-year-old said. “I would say, if anything, this probably would make you more comfortable.”Blue loved the personal way he was able to interact with such a creature in its natural environment, unlike say, a zoo.“I got to see his mouth open under water. I had a pretty good view of everything,” he said. “So that was very awesome.”Gillette wants the average person to understand these reptiles and not to see them as the enemy.“These animals are often villainized and maligned,” said the Deerfield Beach resident. “People think they’re mindless killing machines. Then you see (Casper) and think, ‘Wow, he’s better trained than most people‘s dogs.’”So how does Gillette stay so relaxed and … unharmed? There’s not a scratch on him.A lot of people ask, ‘What if he snaps?’ ‘What if one day he decides he just wants to grab me?’” Gillette says, adding, “At first they all do. They are going to throw everything they have at you because they think you’re trying to kill them, so they’re trying to kill you first.“I have to be capable of handling anything, and I am.”If you goUnderwater alligator tourWhere: Everglades Outpost Wildlife Rescue, 35601 SW 192nd Ave., Homestead, FloridaWhen: Fridays and Saturdays starting at 10 a.m., by appointment onlyCost: $250 for the 30-minute tourInfo and to book: www.crocodilechris.com, 305-247-8000; info@evergladesoutpost.org.Details: Once booked, you meet Gillette out in front of the Everglades Outpost Wildlife Rescue. You’re welcome to bring cameras but Gillette will take pictures for an additional $200 fee. Participants must be at least 16. Do not wear bug spray or other chemicals on your skin.

Life’s a beach with our Destinations Photo Contest

As waves roll in they constantly explode upon hitting rocks off the Napali Coast. (photo: Harold Taylor)

“The Old Boat of Caol”

Photo taken on 9/10/2019 on a trip to the Highlands of Scotland. This shipwreck is on a stony beach of Corpach along Loch Eil near Fort William. Ben Nevis is in the background and is the highest peak in the UK. The fishing boat ran aground during a 2011 storm. (photo: David Wilson)

Puerto Peñasco – Where the beaches are warm and the sunsets melt your heart. (photo: Jessica Miller)

Our favorite beach in the U. P. (photo: John Weiland)

Grandpa playing in the sand with his granddaughter (photo: Kristen Amigoni)

Nothing beats sunsets on the ocean (photo: Dustin Garrett)

We enjoyed a week in August at a Michigan beach house. Nothing like lounging with toes in the sand alongside gently lapping waves under a golden sun. (photo: Barb Horsch)

Peering under the pier

Sunset on the Beach

I captured this sunset right before I was proposed to. It’s a one in a million shot from the beach at the Divi. (photo: Mary Bybee)

Fire in the sky

We have vacationed on the Pacific coast of Mexico for nearly 30 years. It’s always very relaxing at the beach! Sigh! (photo: Vicki Titon)

Hubby and I enjoying our vacation getaway together at Sandestin Golf & Beach Resort in Destin Florida. (photo: Sharon Garfield)