Grbic Restaurant to close Aug. 28, transition into private-event space | Off the Menu 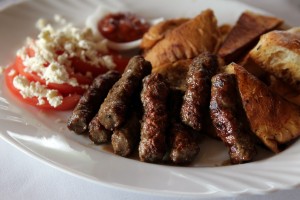 Grbic Restaurant, one of the most prominent St. Louis restaurants to feature Bosnian cuisine, will close after dinner service Aug. 28, ending a two-decade run. However, the Grbic family will continue to operate their building at 4071 Keokuk Street in Dutchtown as a space for weddings and other private events, previously booked events included.

“This was a bittersweet decision that weighed heavy on our hearts, but we know it is the right one,” the announcement reads in part. “The owners, Sulejman (and) Ermina Grbic, deserve to prepare for retirement.”

Ermina, the chef, and Sulejman, a butcher by trade, opened Grbic in 2002. The restaurant has featured a menu that can be broadly defined as Balkan, rather than specifically Bosnian.

According to the announcement, the Grbic’s daughter, Senada, herself an acclaimed chef, and their son, Ermin, “will continue to carry on the family legacy for years to come” as Grbic transitions into an event space.

Senada, Ermin and their late sister, Erna, opened the restaurant Lemmons by Grbic together in 2017.

Senada Grbic did not immediately return a call for comment on Tuesday.

“Over twenty years ago, we proudly introduced Balkan cuisine to the community that we love so much, and we were embraced with open arms,” Tuesday’s announcement states. “Whether you have been dining with us for years or just now found us, we thank you for your support. We are grateful for your loyalty; we are humbled and honored to have served you. You have trusted us with your routine family dinners, your treasured events, and your extraordinary moments, and we thank you.”

The restaurant recommends reservations for its remaining services. According to Tuesday’s announcement, its current hours are 4-9 p.m. Friday, noon-10 p.m. Saturday and noon-8 p.m. Sunday.

This is a breaking news story. Check back for updates.