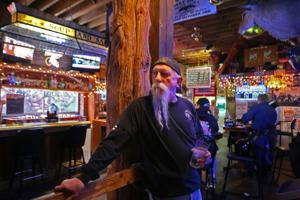 “Lack of help and Jack’s health were both factors in this decision,” the post reads in part. “He is doing fine now, but it’s been a tough year for him. Jack and I are excited to move onto the next chapter in our lives…retirement!”

In 2018, Post-Dispatch columnist wrote about Shady Jack’s and its owner Jack Larrison (“the son of a St. Louis bricklayer”) in an article about a dispute between the saloon and a nearby business owner:

There are bits and pieces of Larrison’s long life as a bar owner in St. Louis hidden in nooks and crannies of this biker bar. It’s a place that is unknown to much of St. Louis, whose residents tend to eschew the mostly empty warehouses and old industrial footprint of the north riverfront. But ask bikers across the country, or the downtown businessmen, lawyers and judges who like to sneak away for lunch and a beer, and Shady Jack’s is an institution.

“Thank you for all the great memories and support over the years,” Shady Jack’s announcement concludes.