Prost! Check out these St. Louis beer gardens of the past 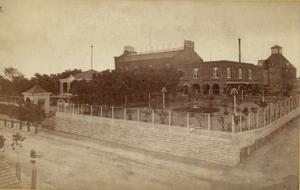 A stereoscope image of Uhrig’s cave and beer garden, circa 1870. It was located below the southwest corner of Jefferson and Washington avenues. It included a narrow-gauge railroad that ran underground to the Uhrig’s brewery at 18th and Market streets. According to the book “St. Louis Brews,” the site above ground had a large beer saloon, dance hall, gardens, malthouse and icehouse. It was the fourth largest brewery in the city by 1860.

The site became a roller rink and then a bowling alley, and in 1908 developers built The Coliseum exhibition hall on the spot. It then closed in the 1950s. During demolition, spelunkers could see the underground caverns and the tunnel where the train once ran.