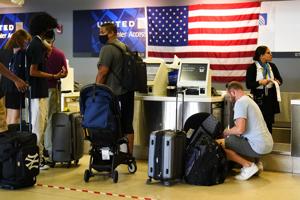 By DAVID KOENIG – AP Airlines Writer
The July Fourth holiday weekend is off to a booming start with airport crowds crushing the numbers seen in 2019, before the pandemic.Travelers across the United States experienced hundreds of canceled flights and a few thousand delays on Friday, much as they did earlier this week.Patricia Carreno arrived with friends at Los Angeles International Airport only to learn that their Alaska Airlines flight to Mazatlan, Mexico, had been canceled.“We’re probably going to drive down to Mexico — to Tijuana, the border — and just fly from there,” she said.The Transportation Security Administration screened more than 2.4 million travelers at airport checkpoints on Thursday, 17% more than on the same Friday before July Fourth in 2019. U.S. air travel is likely to set a pandemic-era record at least once over the weekend.

Traffic on the highway could be heavy too.AAA predicts that nearly 48 million people will travel at least 50 miles or more from home over the weekend, slightly fewer than in 2019. AAA says car travel will set a record even with the national average price for gasoline hovering near $5.Leisure travel has bounced back this year, and that means particularly big crowds over three-day holiday weekends.With many flights sold out over the July Fourth weekend, airlines will struggle to find seats for passengers like Carreno whose flights are canceled. Airlines told customers to check their flight’s status before going to the airport.If you’re already at the airport when your flight is canceled, “it’s time to flex your multitasking skills,” said Sebastian Modak, editor-at-large of travel guide publisher Lonely Planet.Modak advised heading straight to the airline’s help desk, checking its app on your phone, and calling the airline’s customer-service line — an international number might be answered sooner than a U.S. one for airlines that have both. He said driving or taking the bus or train will be a better option for shorter trips.“There’s no getting around the fact that this is going to be a summer of travel delays, cancelations, and frustrations,” he said.By early evening Friday on the East Coast, airlines had canceled about 500 U.S. flights and another 5,100 were delayed, according to FlightAware. Scattered thunderstorms in the New York City area made it likely the numbers would climb. From June 22 through Wednesday at least 600 flights were canceled, and between 4,000 and 7,000 were delayed per day, the tracking service said.Airline executives blame the recent surge of canceled flights on the Federal Aviation Administration, which runs the nation’s air traffic control system, but Transportation Secretary Pete Buttigieg disputes that claim.Passengers are caught in the middle.Mari Ismail, who flew to Atlanta on Friday, said it took a long time to check in and get through security before her flight from Baltimore.“I got to my gate right as they started boarding, so it was a very lengthy process,” she said.Jordane Jeffrey said she booked a return trip from Atlanta to Fort Lauderdale, Florida, for Monday, the holiday.“I’m hoping there are no delays because I work that night,” she said.Airlines sometimes overbook flights with the expectation that some passengers won’t show up. When there are more passengers than seats, airlines will offer cash or travel vouchers to people willing to take the next flight.Earlier this week, a columnist for Inc. magazine wrote that Delta flight attendants offered $10,000 cash to people who would leave a plane waiting to take off from Grand Rapids, Mich.Delta spokesman Anthony Black would neither confirm nor deny the journalist’s account, but he noted that the airline raised the compensation agents can offer in such cases to $9,950 in 2017. That move followed a public-relations nightmare at United Airlines, when airport officers bloodied and dragged a 69-year-old doctor off a sold-out plane — a case that resulted in a lawsuit, confidential settlement, and jokes on late-night TV about United customer service.Even with vacationers crowding into airports and on planes, the total number of people flying has not fully recovered to pre-pandemic levels because of a decline in business and international travel. TSA screened 11% fewer people in June than it did in the same month of 2019.Thursday marked only the 11th time since the pandemic started that TSA checked more people than it did on the same day in 2019, and just the second time since February.Airlines could almost surely be carrying more passengers if they had enough staffing. Many U.S. airlines have trimmed their summer schedules after bad weather, air-traffic delays and a lack of enough employees caused widespread cancellations over the Memorial Day weekend.Airlines paid thousands of workers to quit during the early days of the pandemic, when air travel plummeted and airline revenue dried up. They have been hiring recently, but it takes time to train pilots, who are in particularly short supply.Now airlines competing for key employees are offering double-digit raises to pilots, who find themselves with leverage in negotiations over new contracts.Associated Press video journalists Eugene Garcia in Los Angeles and Sharon Johnson in Atlanta contributed to this report.
Copyright 2022 The Associated Press. All rights reserved. This material may not be published, broadcast, rewritten or redistributed without permission.