The Case for Flying on Low-Demand Days | Travel 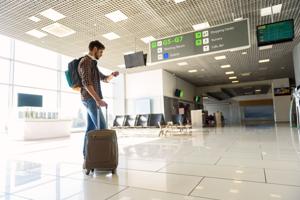 Meghan Coyle
There are countless theories on how the influx of remote work has changed life as we know it. One of the most beneficial for travelers is the end of the five-day in-office workweek. Whether people are going fully remote or commuting on a hybrid schedule, the extra flexibility gives them the ability to choose cheaper days to travel.But so far, “laptop luggers” aren’t moving the needle on price — at least, not yet. Average flight prices, which are notorious for fluctuating with demand, are almost unchanged from 2019, despite a major drop in business travel and a significant increase in remote workers.The cheapest days of the week to fly are largely the same as they were before the start of the COVID-19 pandemic, when most people wouldn’t have even considered taking conference calls from the beach.

Children left alone for hours with dead mother after she overdosed in St. Charles

Hochman: Matt Carpenter, ‘always a Cardinal to us,’ turns ex-teammates into Yankees fans

Hochman: Assessing the state of the Cardinals after a particularly worrisome week

Hummel: The Cardinals almost certainly will make a move before the deadline

Here’s how flight pricing varies throughout the week and what that means for workers, both remote and in-person. Everyone can benefit from planning their travels to take advantage of the cheapest days.What are the cheapest days to fly?Tuesdays and Wednesdays are the cheapest days to travelAccording to data from the travel app Hopper, flying midweek is usually still the best deal.Domestic flights departing on Tuesdays cost about $274 round-trip in economy class on average, which is about 24% lower than the price on the most expensive day to fly (Sunday). That’s savings of about $85 per ticket. The same is generally true for business class and first class travelers.“Remote workers have the option to be flying on these off-days, but they don’t tend to be taking advantage of it as much as they could, if airline pricing is any indication,” says Willis Orlando, senior flight analyst at Scott’s Cheap Flights. “And airline pricing is so sensitive to demand.”If more people were to fly midweek for domestic flights, you might see a similar pattern to international flights. Because travelers often go on longer international trips, there’s less variation in pricing by day of the week. In 2022, flying internationally on the cheapest day (Wednesday) saves travelers about 12% compared with the most expensive day, according to Hopper.Saturdays are the new MondaysIn 2019, Monday was the third least expensive day to fly domestically, according to Hopper’s data. If you couldn’t swing a Tuesday or Wednesday flight, your next best bet would have been a Monday flight, which averaged $303 round trip for a domestic economy ticket.Three years later, Saturday and Monday have flip-flopped spots in the ranking of cheapest days to fly. Saturday flights now average $307 round trip, slightly less than the average Monday flight at $312 round trip.Get home in time for the weekendDepleted business travel demand is also giving travelers more opportunities to find cheaper flights. Spending on corporate travel this year is projected to reach 55% of 2019 levels, according to Deloitte.Nowadays, travelers can snag affordable flights during the workweek, especially to destinations that are more popular with leisure travelers, like Las Vegas or Miami.“Flying out Monday, flying back Friday used to be the highest demand time” for business travelers, Orlando says. “It’s no longer the case anymore. You can get good deals to do that bookend of the week.”All bets are off for holidaysHolidays are exceptions to every pattern. It doesn’t matter that Tuesdays are the cheapest day to fly if it’s the Tuesday after a long weekend or the Tuesday before Thanksgiving. To get the lowest price, you’ll have to extend your trip on either side of the holiday or fly on the holiday.This is where remote workers could come in. With their added flexibility, they can help drive down prices for everyone.Last year, Orlando noticed a level, even surge in flight pricing the week before Christmas. Normally, he’d expect to see a huge jump in prices on the Tuesday and Wednesday before.“Because people can work remotely, people are saying, ‘I’m going to go to my mom’s three days early,’” Orlando says. “So I think it’s going to help ease that pressure that drives the holidays prices especially through the roof.”Rethinking your vacation strategyEven though how people work has changed dramatically over the past two years, it’s still a bit too early to declare that it has leveled flight prices. The cheapest days of the week to fly haven’t changed, so all types of workers can and should plan their vacations around travel dates with less demand.Orlando recommends thinking about it in terms of how much one day of paid time off is worth to you. Is it worth it to save $75 by flying on a red-eye on Wednesday instead of flying Thursday or Friday? Would you have to pay for an extra night of accommodation? Should you book a monthlong Airbnb rental, or can you handle staying extra nights at your parents’ house?The article The Case for Flying on Low-Demand Days originally appeared on NerdWallet.