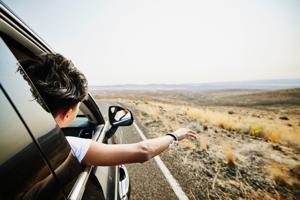 Sally French
A summer road trip used to be a cost-effective, easy getaway. This year, soaring gas prices and expensive rental cars might make you think twice about hitting the road.According to the American Automobile Association, a federation of motor clubs throughout North America, the average gas price was $4.60 per gallon nationally before Memorial Day weekend. Some experts believe the national average might even top $5 later in the summer.Plus, rental car prices hit record highs during the pandemic, up 38.6% in February 2022 versus February 2020, according to a NerdWallet analysis of U.S. Consumer Price Index inflation data.But those roadblocks don’t necessarily mean you have to put the brakes on travel completely. You might just have to shift your road trip plans. Here’s how.

Consider changing your destinationIf you’re open-minded about your vacation destination, consider driving through a region with below-average gas prices. On June 1, 10 states had average gas prices below $4.30 per gallon for regular grade gasoline, according to AAA data.Those states, ranked from cheapest to most expensive, were:Georgia.Arkansas.Kansas.Mississippi.Oklahoma.Missouri.Louisiana.Nebraska.South Carolina.Texas.Given how many of those states border each other, it’d be fairly easy to plan a road trip through the South or Midwest. You could start in St. Louis, and make the roughly four-hour drive on Interstate 70 across the state to Kansas City, Missouri. Make time for a pit stop in Columbia, which is a quintessential college town with the University of Missouri. Boonville is another great stop, where you can tour Warm Springs Ranch, home of the iconic Budweiser Clydesdales. (Walking tours start at $15.) From Kansas City, it’s about three hours on to Omaha, Nebraska, where you can try the allegedly original Reuben sandwich.Be strategic about rental carsIf you’re renting a car, understand that rental car prices can vary dramatically depending on the rental company, whether you’re renting from an airport location versus downtown, and how far in advance you book.Speaking of renting a car, this might be the year you rent an electric vehicle. The EV may have a more expensive rental price, but it could be cheaper than renting a gas-powered car and filling its tank. AAA has a helpful gas calculator tool that factors in the type of car and where you’re driving to help you see the trade-offs.Hotel and vacation rental companies also are making it easier to search for accommodations that offer electric vehicle charging. More hotels are promoting electric vehicle charging as a hotel perk, right alongside traditional amenities like pools and breakfast buffets. Many hotels even allow you to charge your car at no cost.If rental car prices are brutally high, consider booking with alternative rental car companies like Turo or Getaround, which can be cheaper than a major car rental company. Many of these companies are relatively new and allow you to book cars directly from the owners, functioning as an “Airbnb for cars.”For example, the cost of a weeklong car rental from San Francisco International Airport during the first week of July for a standard, gas-powered car like a Volkswagen Jetta would average about $640. Head to peer-to-peer car-sharing site Turo, and there are more than a dozen Teslas available to book in San Francisco on the same dates for less than $800.If you filled the Jetta’s roughly 13-gallon gas tank twice at $6 a gallon (which isn’t unheard of in some states like California), you’d pay more than $150 in gas. That cost plus the rental would have you paying roughly the same amount as booking the Tesla.With so many variables, it pays to shop around before you make reservations.Know where to find the cheapest gasIf driving a gas-powered car is non-negotiable, master the art of saving money on gas. Download apps like GasBuddy, which track local gas prices and can help guide you to the cheapest station near you. It also helps to drive more efficiently. Adjusting how you speed up, brake or use cruise control can have an impact on your gas usage.And if all else fails and you’re stuck with a gargantuan gas bill, at least earn rewards for your spending through a rewards credit card. The best gas credit cards can typically net at least 3% back in rewards for your gas station spending.The article How to Afford Summer Road Trips Amid High Gas Prices originally appeared on NerdWallet.