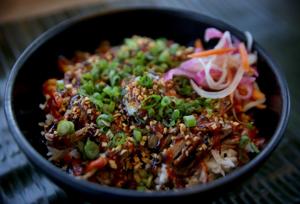 “We couldn’t be more thrilled to see the Guerrilla Street Food legacy continue on, and sharing this news during Filipino-American History Month couldn’t be more perfect!” Crespo said in a statement.

The Alcantaras recently relocated to St. Louis from Arnold’s native Hawaii. According to the announcement, the couple plans to retain such signature Guerrilla Street Food fare as the chicken adobo and the Flying Pig and also introduce new dishes.

The Alcantaras are currently negotiating a lease for Guerrilla Street Food’s new location. The Webster Groves storefront will not reopen, Hardesty confirmed.

“We are overjoyed to be able to live out our dream of owning a restaurant and hope to bring our spirit of Aloha to Missouri through our love of Hawaii’s food and culture!” Arnold said in a statement.

Crespo and Hardesty founded Guerrilla Street Food in 2011 as a food truck. Over the next decade, they expanded the concept to include four brick-and-mortar locations as well as satellite operations inside other venues.

By the beginning of 2022, however, Guerrilla Street Food had contracted to the truck and a storefront in Webster Groves. Crespo and Hardesty announced in April that they were putting the operation up for sale. It has been closed since the end of April.

Among its acclaim, Guerrilla Street Food has been a mainstay of the STL 100.

The First Course by Ian Froeb