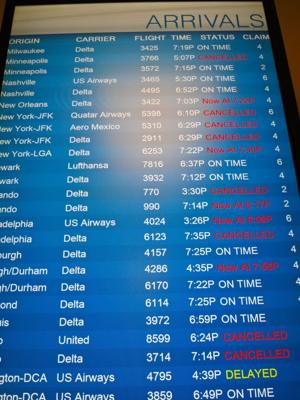 Ed Perkins, Tribune Content Agency
Cole Porter, in a different universe, might have written a song, “Another agony, another trip,” with lines something like these:Four weeks and you think it’s a curse;Three weeks and it couldn’t be worse;One week, will it ever be right?And all of a sudden, it’s time for your flight.Those hypothetical other-universe lines actually do apply to this universe: The outlook for airline travelers the rest of the summer and fall is, charitably, dismal, with very few quick fixes in sight — and very little you can do to avoid cancellations and delays if you plan to fly any time soon.The airlines generally blame weather and air traffic control for delays and cancellations, but they’ve always faced weather and air traffic control. Today’s mess is substantially of their own making:

Instead of retaining key staff during the COVID slump, as they were paid to do, they offered early retirement and encouraged voluntary retirement. This move was particularly damaging to the pilot staff — the key high-skilled positions that are central to an airline’s ability to function. But it also affected other critical personnel: cabin crew, ground handlers, airport agents, and phone agents.Post-COVID, they’ve been posting unrealistic schedules — promises to travelers they’ve been unable to keep — then canceling many of those scheduled trips. Those posted schedules are more what they hope they can do if everything breaks in their favor rather than what they can realistically expect to do.Airline managements aren’t the only culprits. Air traffic control, airports, TSA, and other agencies involved in air travel were also woefully unprepared for the highly predictable post-COVID surge. And climate has not cooperated with travelers, either.The result is the mess we’re suffering. Flights canceled or extensively delayed at the last minute — often not until eager passengers are at their departure airports — with no slack in the system to allow them to find easy substitutes and as long as two-day waits to connect with a live phone agent who might help.But unless it points to fixes, wrangling about blame isn’t helpful going forward. And a lot of folks in the industry are looking to the Department of Transportation to “do something,” preferably something it can do quickly without needing new legislation. Among the suggestions:Raise the mandatory retirement age for healthy pilots from 65 to 67 or even 68.Fine airlines for unrealistic scheduling.Require all airlines to participate in reciprocity agreements allowing canceled or delayed passengers on one airline to transfer to another without paying extra.Designate failure to answer phone calls in less than some number of minutes — maybe 15 or 30 — as an “unfair practice” and fine airlines for violations.In addition, legislators are considering bills that would reduce the minimum flight time required for a commercial pilot’s license from 1,500 to 1,000 or even 750 hours.Realistically, however, none of these fixes would solve problems quickly enough to ease the crunch of heavy Fourth of July and Labor Day weekend travel. Instead, maybe the only possible quick fix is voluntarily schedule cutbacks — a move already underway that will probably help but add undesirable consequences.Thus, for now, it again falls on travelers to minimize risks. And, sadly, I have no “secret insider tips” beyond the usual suspects:Reserve flights early in the day to avoid cascading late-day troubles.Get to airports early for your flights (well, duuh).Consider a lounge membership or single-day entry in case you’re stuck in an airport for a long time.Keep continuous tabs on your flight online or through an app.Buy tickets through a full service travel agency that maintains a staffed 24/7 assistance line.Where you can, avoid flights on small regional planes — the ones most likely to be canceled.Book “plan B” backup flights on refundable tickets or re-depositable frequent-flyer awards.Above all, be prepared to fix problems you encounter on your own. Despite the best of intentions, airline personnel will probably be unable to do anything immediately useful.(Send e-mail to Ed Perkins at eperkins@mind.net. Also, check out Ed’s new rail travel website at www.rail-guru.com.)