Ask a Travel Nerd: What Does the Strong Dollar Mean for Summer Travel? | Travel 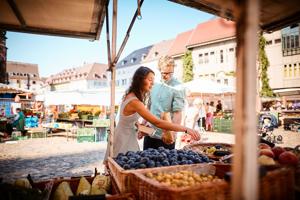 Sam Kemmis
Believe it or not, the U.S. dollar has strengthened against many foreign currencies this year. Yes, the dollar has lost purchasing power in the face of inflation but has actually gained ground relative to other currencies.The upshot: Summer travelers heading overseas could enjoy a discount on everything from hotel rooms to croissants.The caveats: The exchange rate is much better in some countries than in others. And global inflationary pressures are still driving up prices overall.If you’re still deciding where (and whether) to travel this summer, the strength of the dollar could be a deciding factor.

The dipping euroThe dollar was 11% stronger against the euro in April 2022 compared with April 2021, according to data from the Federal Reserve. The two currencies have been flirting with 1:1 parity, which hasn’t happened since the early 2000s. For the past 20 years, a dollar has been worth less than a euro.Besides avoiding the headache of calculating the dollar cost of a 300 euro train ticket (it’s now about $300), this parity can make a big impact on European vacation budgets. Spending in countries that use the euro will be cheaper, in relative terms, than it has been in a long time.Assuming exchange rates remain steady throughout the summer, this could mean hundreds of dollars in relative savings. They’re “relative” because the absolute prices of expenses such as food and transportation will remain affected by global inflation.Some changes are bigger than othersThe U.S. dollar is strong against many foreign currencies this year, but not all. Converting dollars to Japanese yen yielded 16% better results in April than the year prior, but the Mexican peso and Canadian dollar have remained relatively flat.Before packing your bags for Tokyo, remember that Japan is still restricting foreign visitors. As of June 10, 2022, people from certain countries — including the U.S. — can visit Japan as part of a package tour. Independent travelers are not yet welcome.Note also that Canada and Mexico have seen little change in their currencies relative to the U.S. dollar in the past year. Despite this, U.S. travelers continue to flock to Mexico, with 31% more citizens heading south of the border in April 2022 compared with April 2019, according to data from the International Trade Administration.U.S. vacationers remain wary of Europe, with 25% fewer departures for that continent in April 2022 compared with April 2019.This situation provides a double-whammy opportunity for money-conscious travelers. The U.S. dollar is particularly powerful in Europe and fewer people are visiting, which could keep prices down for accommodations and other expenses.These trends offer a compelling financial reason to skip Mexico for the time being.Results may varyCurrency exchange rates fluctuate, which means that a good rate against one currency today won’t guarantee the same savings come vacation time. Given the especially volatile economic trends so far in 2022, the graphs above could invert in 12 months’ time.Still, the trends so far this year paint a rosy picture for Americans traveling abroad, especially to Europe and Asia. Putting a 10 euro German beer on your travel credit card will sting slightly less than usual knowing that it costs “only” about $10.And given all the depressing news about prices this year, it’s nice to see at least one silver lining.The article Ask a Travel Nerd: What Does the Strong Dollar Mean for Summer Travel? originally appeared on NerdWallet.