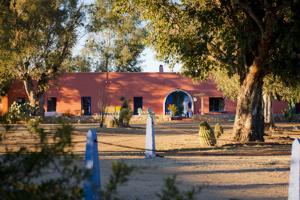 By Jim Winnerman Special to the Post-Dispatch
SASABE, ARIZONA – The unique experience awaiting guests at Rancho de la Osa begins 50 miles before they arrive at the isolated 600-acre location far into the Sonoran Desert, just over an hour south of Tucson, Arizona.The first hint visitors see are yellow caution signs warning free-range cattle may be on the highway. More signs alert motorists to be on the lookout for wild burros and deer. Every few miles the road suddenly dips, and signs warn against driving into standing water when the unexpected rain gushes out from desert ravines and swiftly washes over the narrow two-lane road.

Just before the Mexican and United States border a dirt road leads through the desert to the remote Rancho de la Rosa Guest Ranch.

Visitors run out of American highway just as the 30-foot-high border wall comes into view, looming in the distance as if it were an art installation by the late artist Christo. There, the pavement ends in the almost abandoned and tiny border town of Sasabe, where a two-mile dirt road wanders off to the ranch.

After the ranch had been closed for a few years, Russell True and his partners purchased it in 2015. “The ranch well might be home to more Arizona history than anywhere else,” True said. “We bought it to save it.”The history he refers to possibly begins as long ago as the year 300 AD when the ranch site was a village for Tohono O’Odham Indians, who viewed the nearby 7,730-foot Baboquivari Mountains as the home of the God of Creation. The ranch name “Osa” translates to bear in Spanish and was derived from the bears that once roamed the rugged hills in the area.“The earliest record of the ranch being called Rancho de la Osa dates to 1846,” says Paul Bear, co-owner of the ranch who has studied the history of the area for six years.By the early 1700s the primitive village had become Spanish territory, and the settlement attracted the Jesuit missionaries who established a mission outpost, convenient for converting the indigenous people to Christianity.Widely recognized as the longest continually used building in Arizona, today the 1722 mission building serves as the cantina for the ranch. Now it is where guests are served hors d’ oeuvres before dinner. After supper, guests “saddle up to the bar” on well-worn saddles creatively adapted to barstools or listen to once-a-week cowboy poetry readings.With Mexican independence from Spain granted in 1821, the ranch was in Mexico until the Gadsden Purchase of 1854 when the property became part of the United States. Then, in the late 1800s the ranch was bought by cattle baron Col. William Sturgis.In 1889 Sturgis finished building the long, pink Territorial style, adobe hacienda, or “great house,” also still in use today as a dining hall, library, coffee bar and check-in office.In 1924 Louisa Wetherill, a Navajo historian and archaeologist came to the area investigating a theory that several Navajo clans had migrated southward in pre-Columbian times. She did not find the lost tribe but discovered the perfect location and existing buildings needed to build a guest ranch. Soon after, she and her husband bought the ranch from Sturgis and opened Rancho de la Osa.Dick Jenkins, chairman of the Arizona Democrat Party, purchased the ranch in 1937, and hosted several politicians including President Lyndon B. Johnson and Vice President Hubert Humphrey. John Wayne and Cesar Romero were among the many celebrity guests who visited.“During the silent film era more than 20 movies were filmed in the area,” Bear says. “Some of the buildings at the ranch are identifiable. One of the more popular movies was “Light of the Western Sky.” It was remade two more times in the 1940s and 1950s and was based on a Zane Grey novel of the same name.Today each guest records his or her own history and memories on a cell phone while participating in activities that include daily horseback rides based on a guest’s level of experience.Ranch wranglers also use the ranch’s herd of Criollo cattle to teach interested guests how to work cattle on horseback. The cows are the descendants of those brought to the area by Spanish explorers.Other activities include sport shooting, archery and fat tire electric bicycle rides through the desert. Guided five-person utility terrain vehicle rides take guests to the nearby primitive yellow stone ruins of an early 1900s transfer station where ranchers came for supplies.In a creek bed a few steps away from the ruins, a large, smooth stone displays the petrographs of Native Americans that may date somewhere between 300 and 1500.Another guided UTV journey drives guests alongside the border wall to the lonely spot where it ends, and guests can walk back and forth across the invisible boundary.The adjoining 117,000-acre Buenos Aires National Wildlife Refuge, also nestled against the border with Mexico, offers miles of hiking trails and overlooks for wildlife sightings such as javelina and herds of pronghorn sheep, or the 325 species of birds that have been seen in the refuge.The refuge visitor center displays a full-size likeness of a jaguar killed by a poacher. Very rarely seen in the area, the cat has a body length of up to 6 feet and a weight of as much as 200 pounds and is the largest cat species in the Americas.“They wander over from Northern Mexico, but this is as far as they get in the United States,” says Hanna Pierce, a wildlife refuge specialist. “We also have coatimundi here,” she says. ”It is also a mammal the size of a large house cat, has a ringed tail, and hangs out in trees.”Back at the ranch, lucky guests may spot the resident great horned owls or find themselves staring face to face with free-range cattle that have wandered onto the property.At dusk, a sprinkling of clouds forewarns the sky will soon change into a spectacular fire red and pink sunset, before changing into a ceiling of brilliant stars against a pitch-black sky. The perfect place to enjoy the views is the large, heated swimming pool surrounded by a high adobe wall adjacent to the cantina.The building housing the guest rooms had several uses in the late 1880s. “That string of guest rooms once housed a Mexican customs station and a chapel, while the remainder of the rooms were used as barracks for the Mexican army to help protect the ranch from attacks by Apache Indians,” Bear says. “This was before Arizona became a state in 1912 and the ranch was thought to be in Mexico. In fact, the boundary was thought to be 12 miles north of the ranch. There was quite an uproar when it was discovered Mexican troops had been stationed on the ranch and on American soil.”

Each guest room has a fireplace and its own collection of one-of-a-kind primitive Mexican wooden furniture. Walls are painted a myriad of bright colors including turquoise, blue and yellow.

Vivid colors are everywhere, from the faded blue doors and pink adobe walls of the hacienda, to the turquoise, blue and greens of the chairs in front of each guest room, and the posts supporting the canopy over the entry into each room.Across the courtyard and directly opposite the hacienda behind an assortment of horse trailers is the wrangler’s bunkhouse. The back door of each wrangler’s room opens directly onto numerous horse corrals where the 50 horses and mules used for trail rides are penned.The men and women wranglers who take guests on horseback rides are an enjoyable part of the dude ranch experience at Rancho de la Osa. As a group they are described by head wrangler and livestock manager Ross Knox as “cowboys and cowgirls to the bone.”

7. Wranglers at the ranch each have a thick walrus style mustache. Ross Knox, on the left, describes the men as all being “cowboy to the bone.” photo Barbara Winnerman

Knox himself is a prime example. “I call him ‘the legend,’” Bear says.“Not too long ago I did not do much talking, unless you were a cow or a horse,” the bow-legged 62-year-old Knox says, sitting in a leather chair in front of a fireplace wearing a wide brim black cowboy hat, leather vest and black kerchief wrapped around his neck. A thick, droopy, walrus mustache cascades over his lips.“My first memory of horses was my first memory,” he says.Knox had plenty of time to talk to animals during the years he led a string of mules loaded with supplies to Phantom Ranch at the bottom of the Grand Canyon, making the four-hour round-trip trek every other day for 15 years. The 45,000 miles he logged sitting atop a mule is recognized as a record for the most miles traveled by a human in the canyon.On one steep return climb to the rim, the narrow trail collapsed under his mule train, and a mule fell on top of him as they tumbled over the edge together. “I heard someone say they thought I was dead,” he recalls, before he was rescued by a helicopter.One night a week Knox recites cowboy poetry to ranch guests in the cantina. “I was writing cowboy poetry for myself long before they had cowboy poetry festivals,” he says. Now he has established a national reputation as a cowboy poet.Knox is, in fact, a legend in his own time. He has won the World Mule Packing Championship twice, packing four mules in record time with a pile of miscellaneous items that Ross says could fill a semi-truck trailer. In 2019 he became one of only eight cowboys enshrined on the Working Ranch Cowboy Association Wall of Legends in honor of his life on the range.He bids farewell to guests at the ranch by lifting and tipping his 10-gallon hat. Then he raises his arm high in the air before zooming his hand toward a waiting outstretched hand and offering a firm handshake and a sincere farewell. “I am sure glad you came to the ranch,” he says. “I hope our trails cross again.”IF YOU GO The ranch: Each of the 19 guest rooms has its own collection of one-of-a-kind primitive Mexican wooden furniture. Walls are painted a myriad of bright colors including turquoise, blue and yellow. Chairs, lamps and blankets feature a cowboy theme, and rooms have a kiva fireplace built into the wall. Firewood is stacked outside each door. How much: Rates start at $119 per person per night and include one breakfast. Additional activities can be added a la carte. All-inclusive rates begin at $225 per person per day for a stay that includes horseback riding, ranch activities, and all meals served family style on one long wooden table in the hacienda.  More info: ranchodelaosa.com